It’s an old-school RPG game in WebGL. Its still under heavy development. http://www.chromeexperiments.com/detail/moonshades/

Tech Predictions for the Year 2013

In the next three weeks, on January 25th-27th there will be a Global Game Jam – 48h coding marathon for game developers. I’m organizing the Warsaw Game Jam, and there will be three events during one weekend: Global Game Jam mentioned earlier, Mozilla Game On competition and an initiative called One Game a Month. If you’re near Warsaw on that weekend come join [...]

I crashed through some technical barriers I was experiencing and finally completed chapter 9 of the Second Edition of our HTML5 Canvas book for O’Reilly. All of the chapters have been updated, revised, and re-written to add new content and replace out-dated or incomplete ideas that simply were not possible on the Canvas when we [...]

Michael Chang posted a tutorial on HTML5Rocks.com about how he and the Data Arts Team and Google went about creating the 100,000 Stars Chrome WebGL Experiment. It’s a beautiful project and the tutorial covers how they handled it using three.js and css3d. “The topics discussed here will be fairly broad, and require some knowledge of [...]

…submission process and that is not ideal.” As games sit in the crossfire of a national debate on…to a huge audience. Endgame: Syria is HTML5, and anyone can play it on PC and even on iOS…

This site is a gathering of various implementations of the classic game Breakout in numerous different engines. There is a plethora of JavaScript game engines out there. By comparing and studying the implementations, you should better be able to find an engine that meets your needs and style. http://city41.github.com/breakouts/ 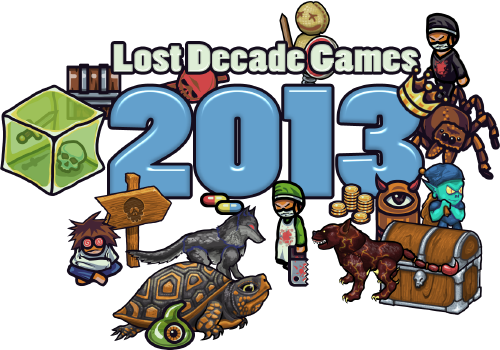 Goals are important. Without them, it can be difficult to gauge your progress, and that makes it hard to tell how much ass you’re kicking! Geoff and I banged out some goals for this year and I thought I’d share them with you.

Unfortunately, money is the most fundamental aspect of staying independent. Rent is due, and somebody’s got to pay it! We made a little more than half of this amount in 2012, and we want to stay ambitious, so this seemed like a nice, round number.

It’s ambitious but doable. In order to achieve this number we’re going to need to hit one of these bullet points really hard:

We’re most interested in passive revenue streams. Really successful indies are making money in their sleep, and our goal is to join them. Game licenses are the most immediate way to pay rent, but the HTML5 game market is very young and tumultuous (translation: it’s unreliable). Lastly, development contracts were far and away our biggest earner last year, but were also the most demanding of our time.

In our best month last year we made a few hundred dollars in passive revenue, but spikes like that typically only happen when a game is launched or first introduced to a new platform/market. Payouts from portals like AOL and Kongregate have been sadly lackluster so we’ll be busy this year trying to dig up great portals for our games where we can share in the advertising and IAP revenue.

3. Get a news story on a popular games news site

I’m proud and happy about our coverage on VentureBeat last year, as well as our coverage on TechCrunch in 2011 (even if we aren’t the focus in the former). But we want our games to be put directly in from of gamers as well as entrepeneurs and techies.

Getting high-profile media coverage for indie games is extremely difficult to say the least, but offerings like Joystiq’s Indie Pitch are a big step in our direction. Rock, Paper, Shotgun is also known to be very indie-friendly, though it may be difficult to get their attention as browser-based developers.

Either way we’re hoping to somehow garner the media’s attention and get many gamers playing our games!

I was really stoked last year when we reached 1,000 Twitter followers, but each 100 feels like a sprint. As of this writing, we’re not even 100 over that first 1k yet, and though I’d love to shoot for 10,000 followers, it doesn’t yet feel like a reachable goal. So I’d be really happy with 5,000 by this time next year. Help us out by retweeting our stuff!

We met two of our goals from last year: get 1,000 Twitter followers and get 10,000 unique hits in a month. Both of these milestones were hit near the end of the year; we just barely made it.

Notice that our goals list doesn’t include a bullet point like, “Launch 5 games.” Our primary focus is always developing games, and we will release several games this year (as you’ll soon see!), but we don’t want to restrict ourselves to an arbitrary number. We’re not even sure what exatly we need to stay afloat just yet, but the world is an ever-hungry bottomless pit of desire for games, so we’ll keep cranking them out and experimenting with ways to make them profitable.

Wish us luck, and thanks for your support!

My thoughts about the Turbulenz Engine